World Radio Day (WRD) 2020 was widely celebrated across Nepal culminating at a national level consultation in Kathmandu on February 13, 2020. As a run up to the consultation, interactive programmes were held in all seven provinces of Nepal. Representatives of provincial and local governments, civil society organizations, and community radio practitioners attended the programmes. Following a general stock taking of the community radio sector in each province, discussions focused on ways of improving and strengthening diversity of content, ownership, and participation in community radio stations. Broadcasters and social activists representing Dalits, the LGBTQI community, religious minorities and other marginalized sections of the society participated in these discussions.

New laws and regulations are being introduced as Nepal transitions from a unitary state to a federal structure resulting in emerging challenges for the community radio sector. For example, provincial and local governments have moved to set up broadcasting units, which is generally viewed as a highly unacceptable attempt aimed at controlling the broadcasting media by the local governments. The consultation programmes offered a platform to discuss the matter between the sector leaders and government representatives. 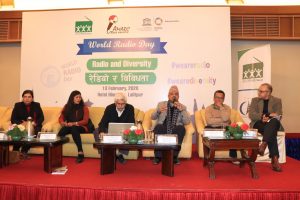 The national level consultation in Kathmandu was attended by leaders of the community radio sector, the head of the National Human Rights Commission, representatives of the UN agencies including the UNDP country representative, ambassadors, representatives of political parties, parliamentary committee heads and members of parliament. Former Prime Minister Mr. J N Khanal, who issued the first community radio license of Nepal in 1996 as the then communication minister graced the event as the chief guest.

Organized into three different sessions, the programme took a critical look at the achievements and gaps of the community radio (CR) sector in terms of achieving overall diversity in community radios by way of ownership, content, and community participation. In a session titled ‘media policy and diversity’ participants spoke about the value of enabling policies and legislations for promoting an all-round diversity in the broadcasting media and addressing the gaps which currently in Nepal in that regard. Similarly, in a session titled diversity in newsrooms and content, participants took stock of the state of inclusiveness of radio programmes, especially in the newsroom.

The programmes at the province level and the national consultation in Kathmandu were jointly organized by AMARC Asia-Pacific and ACORAB with financial support of the UNESCO Kathmandu office.

Chair to co-host seminar on ‘Voices for Change and Peace: Taking Stock of Community Radio in South Asia’