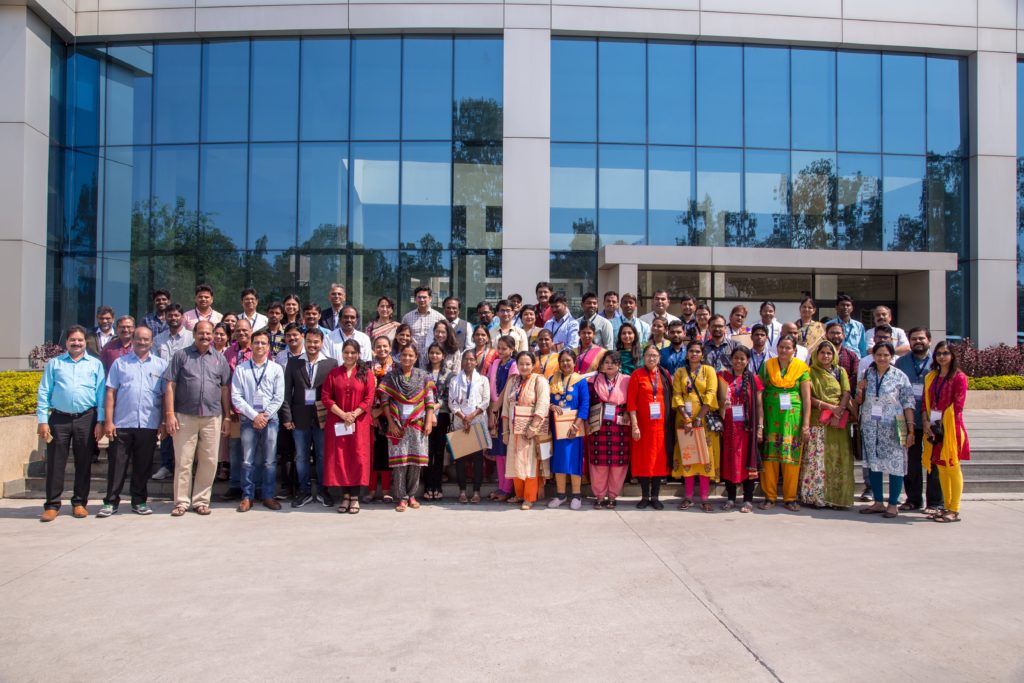 In what could be termed as an out-of-the-box approach, the partnership between the ECI and the UNESCO Chair on Community Media was kick-started by a three-day national workshop on the University of Hyderabad campus on February 22-24, 2019.

With a view to strengthening the power of democracy, the UNESCO Chair on Community Media, University of Hyderabad collaborated with the Systematic Voter Education and Electoral Participation (SVEEP) programme of the Election Commission of India (ECI) to leverage electoral literacy and voter education through community radio (CR) during the General Elections to the 17th Lok Sabha that was conducted during April and May, 2019. The collaboration, named as the Festival of Democracy (FoD) project, was aimed at building inclusive, informed, and ethical voters’ participation in the parliamentary elections.

As the ECI called and promoted the Lok Sabha election as a great festival (“Mahatyohar”), the objective of the Festival of Democracy (FoD) project was to ensure that the message reaches out to the last mile for effective voter participation. The project adopted a decentralised and bottom-up communication approach through community-generated audio content.

Through this partnership, 25 community radio stations from 16 states of India were brought together to produce, in a short span of two months, over 100 hours of radio programmes (minimum of 12 episodes) in 11 major languages – Hindi, Punjabi, Gujarati, Marathi, Telugu, Tamil, Malayalam, Kannada, Bengali, Odia, Assamese – and other minor languages and dialects such as Bundeli, Marwari, Haryanvi, Desia, and Santhali.

The community radio stations were chosen for the FoD project based on their track record of working with marginalized communities such as rural poor, small farmers, migrant urban working class, Dalits and tribals, fisherfolk, and women’s collectives and cooperatives. Seconding Election Commission’s intention of ‘leaving no one behind,’ the 50- plus assembled station representatives from different nooks and corners of the country agreed that they would focus on groups at different socio-economic levels, in local languages, and in ways that are meaningful to local contexts.

On the first day of the workshop, the participating community radio stations in the country were urged to gear up for the upcoming general elections by unlocking the potential of the medium to promote electoral literacy and voter education. Realising the importance of community radio as a medium to sensitise and promote electoral literacy, the ECI backed this unique idea to reach out to maximum voters at a short span with its awareness messages. The idea was to project community radio stations as ambassadors of the Election Commission and take up issues like ethical and informed voting and focus on various sections of society.

The ECI officials also conducted two activity sessions with the community radio representatives focusing on the relevant information about voter registration, voting rights, and the electoral procedure. A special session educated the station representatives on the do’s and don’ts according to the Constitution and the norms of the ECI.

On day two, Dr. K.K. Kailash, Associate Professor, Department of Political Science, University of Hyderabad conducted a session about Indian democracy and the centrality of periodic elections in our polity. After some more sensitisation and orientation sessions, the Chair team organised breakout sessions in which the community radio broadcasters were split into four different groups, keeping in mind the gender, language, and culture of the radio broadcasters. The groups then worked with the Chair team facilitators and identified some key themes for radio production.

On day three, a session was conducted on programme scheduling by the Chair team to plan how the programmes produced were to be broadcast by the partner stations. Following that session, the Chair team oriented and showcased the FoD portal to the partner station representatives. The demonstration aimed at showing the ways and means of uploading and sharing the aired programmes on the FoD portal.

Following the capacity-building workshop in February, all the participating stations in the Festival of Democracy (FoD) project got down in right earnest to ideating, planning, and the actual production of radio programmes that synchronized with different stages of the electoral process – initially, on the idea of democracy and different levels of governance in India, moving on to voter registration, and, as the political campaign picked up, on informed and ethical voting, and, finally, on the voting procedures and the technology used.

All of them added community outreach activities to their repertoire and managed to build linkages with different groups in the community. During the four months of the project, all the 25 partner stations worked quite efficiently and effectively to sensitise voters about voting, voting rights, and the election procedures. Some of the activities carried out by the partner stations were featured in local as well as national newspapers.

In an unprecedented seven-phase election in the country, with a mammoth electorate of 900 million, all the partner stations successfully broadcast their 12 planned episodes on different aspects of elections.   The detailed programme outputs of each station are presented in the table below:

Table 1: List of Community Radio Stations, their estimated audience, and name given to FoD series:

In order to review and assess the activities of all the partner stations, the UNESCO Chair on Community Media team visited every participating radio station. It allowed the team to take personal stock of the progress made by various stations and the special initiatives they took for voter education and electoral literacy through community radio. 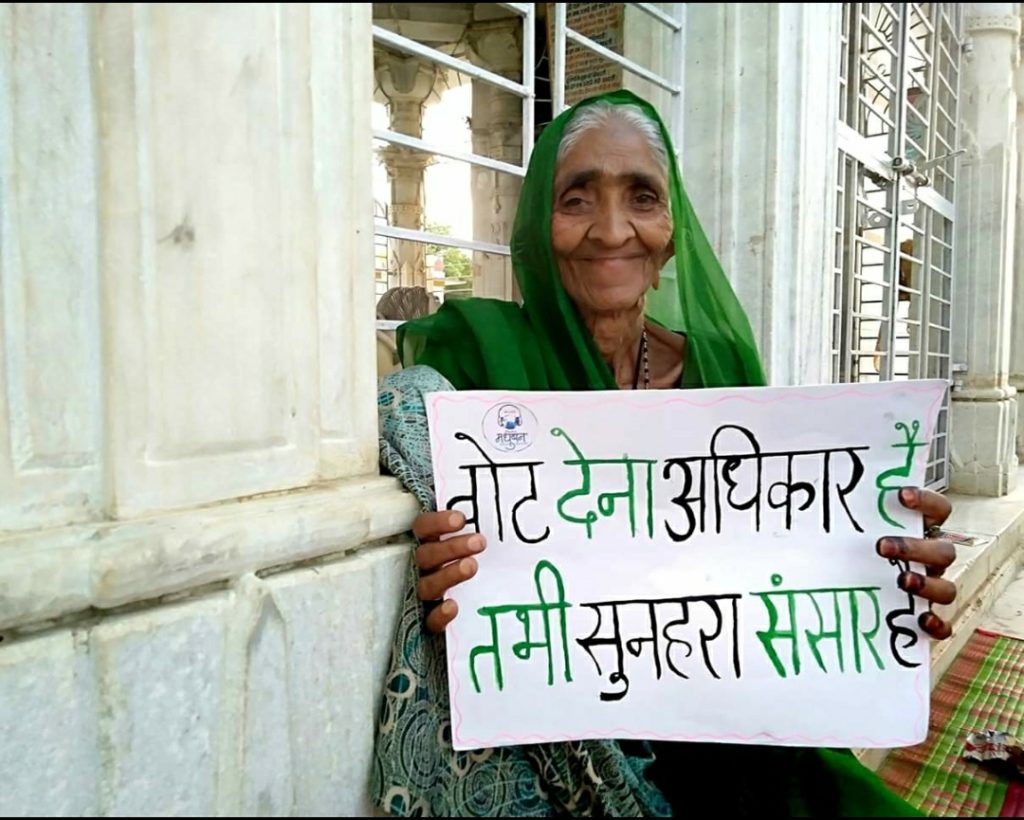 Her vote, her right!

With an aim to regularly follow-up on the FoD project, the UNESCO Chair team set up a Project Management Portal i.e. http://mis.cmarch.in/. This enabled both the project management team (the Chair) and partner community radios to interact with and update each other about the happenings from different locations – both on-air and off-air.  Simultaneously, the UNESCO Chair on Community Media team ran a social media campaign under the tag ECI FoD on both Facebook and Twitter.

As the General Elections of 2019 ended with unprecedented voter participation, it is indeed a matter of some satisfaction that grassroots, alternative medium like community radio played a critical role in promoting voter education and encouraging electoral participation.

Community radios have the potential to reach geographical areas that are relatively untouched by mainstream media and do so in local languages and in a context-specific manner. This project has resulted in the production of over 100 hours of radio content on voter education and electoral literacy in 11 major languages across 16 different states.

The Festival of Democracy project of the UNESCO Chair on Community Media managed to engage effectively with key stakeholders to make a difference in this election. It has been successful in having communities design their own messages and allow them to make informed choices and decisions on voting. Overall, the FoD project has showcased the innate ability of the community radio stations and what they can contribute to strengthen the power of democracy through their distinct yet effective ways.

In the second phase of this project, the Chair team proposes to do a de-briefing workshop with the 25 stations and also a detailed content analysis of all the 100+ hours of programming done by them. The team plans to undertake a field-based study to understand how the communities engaged with the content and what difference it made to their own comprehension of the electoral process and decision making.

Radio Madhuban: A Friend of the Community During Covid-19

Doing it better – a self-assessment guide