In an endeavour to help the community radio stations across India produce programmes aligned with Sustainable Development Goals (SDGs) during the COVID-19 pandemic, Seeking Modern Applications from Real Transformation (SMART), in partnership with UNESCO, New Delhi, organised a Webinar series titled “Communicating SDGs from the perspective of COVID-19.”  The 6-part weekly webinar series used the SDG Toolkit for community radio stations, developed by SMART with support from UNESCO and UNICEF, as the basis to hold these discussions. 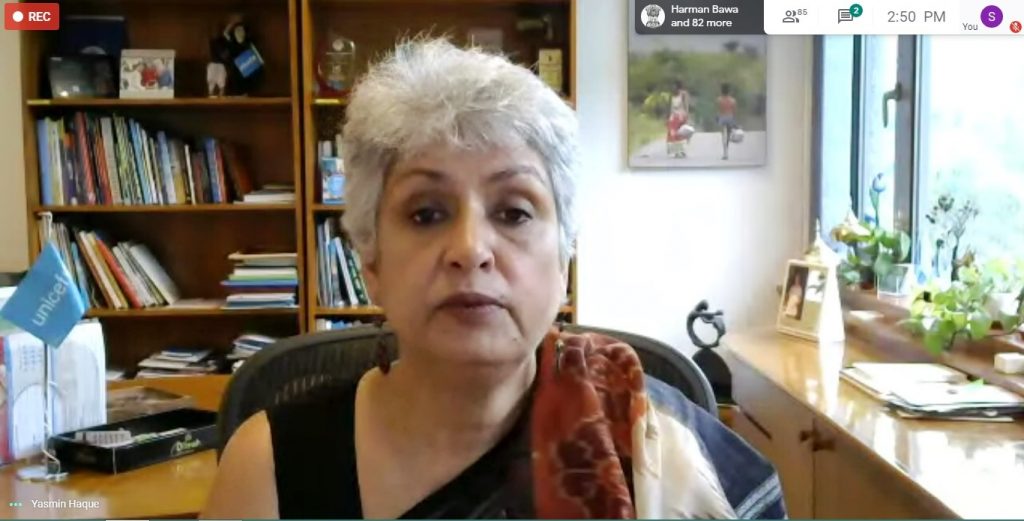 The webinar series that started from June 3 was anchored by the two co-authors of the SDG Toolkit: Ms. Archana Kapoor, Founder and Director of SMART and Radio Mewat, and Ms. Pinky Chandran, Co-Founder/Director of Radio Active.

“SDGs are people’s goals and in the context of COVID, revisiting them became imperative because the pandemic has deepened the fissures of inequality across the globe and has set us back in our quest to achieve them. Therefore, it is important to work at the ground level to ensure that the people’s goals are understood and worked at so that the targets of the goals can be attained,” said Ms. Kapoor.

“Community Radios play an important role in communicating and furthering SDGs (at various levels) from acting as a catalyst, creating awareness, to enabling participation and facilitation of an active development and governance process. The role of community radio becomes more important during a crisis like COVID-19,” said Ms. Chandran.

The series featured 16 experts across various sectors who decoded and spoke at length about the different SDGs. It also had presentations and experience sharing by 28 community radio stations (CRS) across India and clocked over 750 attendees overall. 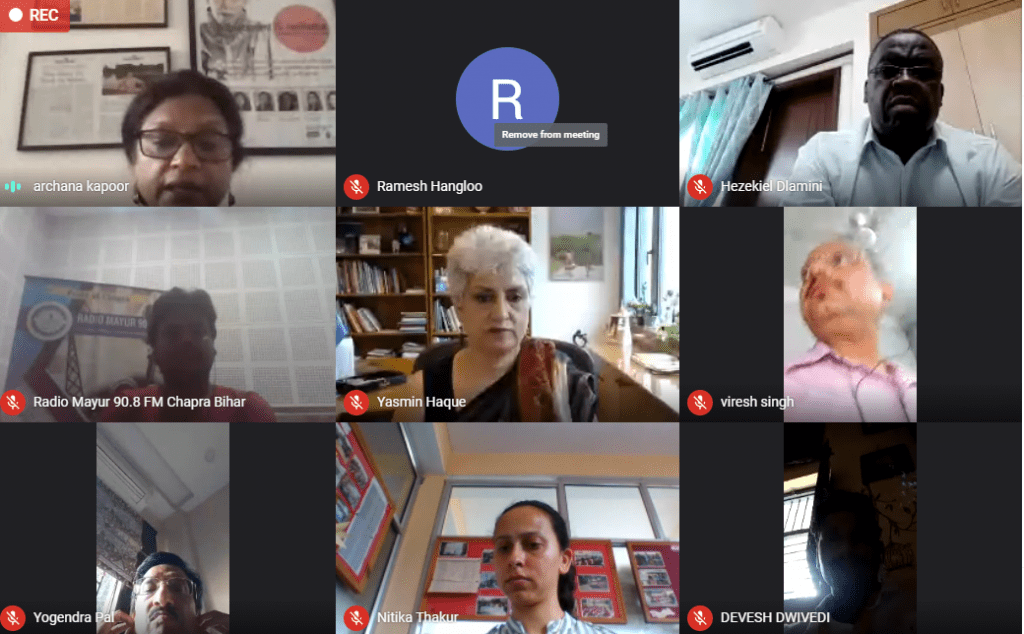 Participants at the webinar.

Mr. Eric Falt, Director, UNESCO, New Delhi, set the agenda of the series by opening the first webinar with these words, “With these webinars, we aim to integrate the underlying themes under the Agenda 2030 into the day-to-day programming by CRs, keeping in view the challenges posed by COVID. We are certain that this exercise will help familiarise the CRs with the toolkit and form the basis of creative programming to address the issues relating to the health crisis. We strongly believe that the toolkit will strengthen the communication on this front by conveying the message in a language and context  (that is) more agreeable by the communities.”

During the first webinar which focused on SDG 1 (No Poverty) and 2 (Zero Hunger), 87% of the participating radio stations said that they were aware of the SDGs and all of them agreed that CR stations could contribute to achieving them.

“Reaching out to communities, improving their quality of life and working on social indicators of health is a long-drawn game,” said Ms. Neerja Shekhar, Joint Secretary of Ministry of Information & Broadcasting, in the second webinar, held on June 10. She highlighted the role of CR in India. “The social contribution of community radios is commendable. They have been working so hard and responding to the needs of local communities even amidst lack of funds, advertisements and various other financial constraints. The government is determined to support community radios proactively,” she said. 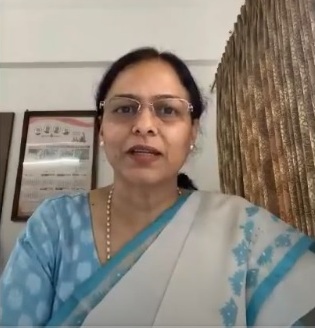 Neerja Shekhar speaking at the webinar.

The participating CRS discussed SDG 3 (Good Health and Well-Being) and 6 (Clean Water and Sanitation) at length and five stations from Kerala, Uttar Pradesh, Uttarakhand, Haryana and Rajasthan shared their experiences of working on these goals.

The third webinar was held on June 17 on SDG 4 (Quality Education) and SDG 10 (Reduced Inequality) in which Ms. Madhu Parhar, Director of CEMCA and Huma Masood, National Programme Officer of UNESCO addressed the stations. These were followed by presentations from three CRs from Maharashtra, Madhya Pradesh and Tamil Nadu.

The illustrious developmental feminist activist Ms. Kamla Bhasin was the key speaker for the fourth webinar, which focused on SDG 5 – Gender Equality and was held on June 24.

“Gender inequality is the only inequality which exists within the family,” Ms. Bhasin said and emphasised on how the pandemic has made inequalities in our society more visible. “In a society with any kind of inequality, development is not possible. Equality demands struggles on all fronts,” she said. She called on everyone to join hands in the struggle against patriarchy and not hide behind the veil of “culture”. Her interaction with the participants was followed by presentations from two CRs from UP. 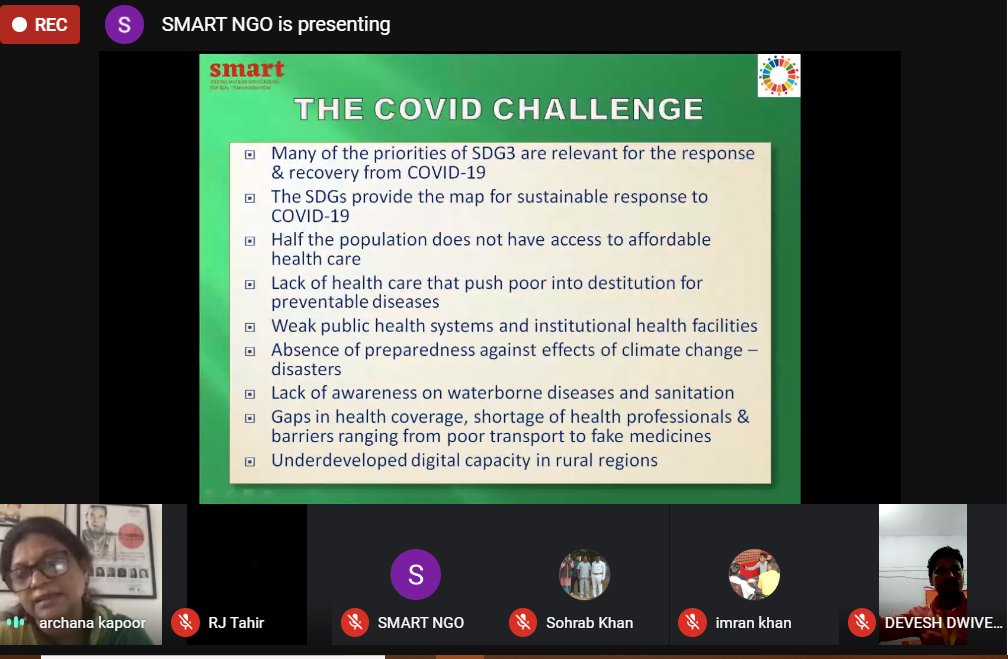 A presentation slide during a webinar.

Mr. Bagai stressed that not only the United Nations but every country’s aim for the next ten years should be to mitigate climate change. He added that in order to fight the climate crisis, there is a need to communicate SDGs to local communities and community radios can play a big role in this endeavour. “The brunt of climate change, water scarcity, disasters etc. are borne by local communities and indigenous people. On working in close collaboration with these communities, we will also be exposed to innovative techniques,” he said.

Representatives from six CRS of Tamil Nadu, Odisha, Tripura, Uttarakhand and UP shared their experiences of working on environmental issues.

The last webinar on SDGs 9, 16 and 17 was led by Dr. Yasmin Ali Haque, the India Representative of UNICEF. “The need of the hour is to look at the holistic development of the children. We need to focus on health, nutrition, education, mental health, water and sanitation simultaneously. These issues cannot be seen in isolation,” she said, stating that community radios have a huge role to play in empowering communities and sending out a positive message.

Her inspiring words, followed by presentations from 8 CR stations of Manipur, Himachal Pradesh, Andhra Pradesh, MP, Tamil Nadu, Rajasthan, Bihar and Jammu, reflected the power of the CR community spread across India and brought the webinar series to a close on July 8

CR license fee to be waived off?