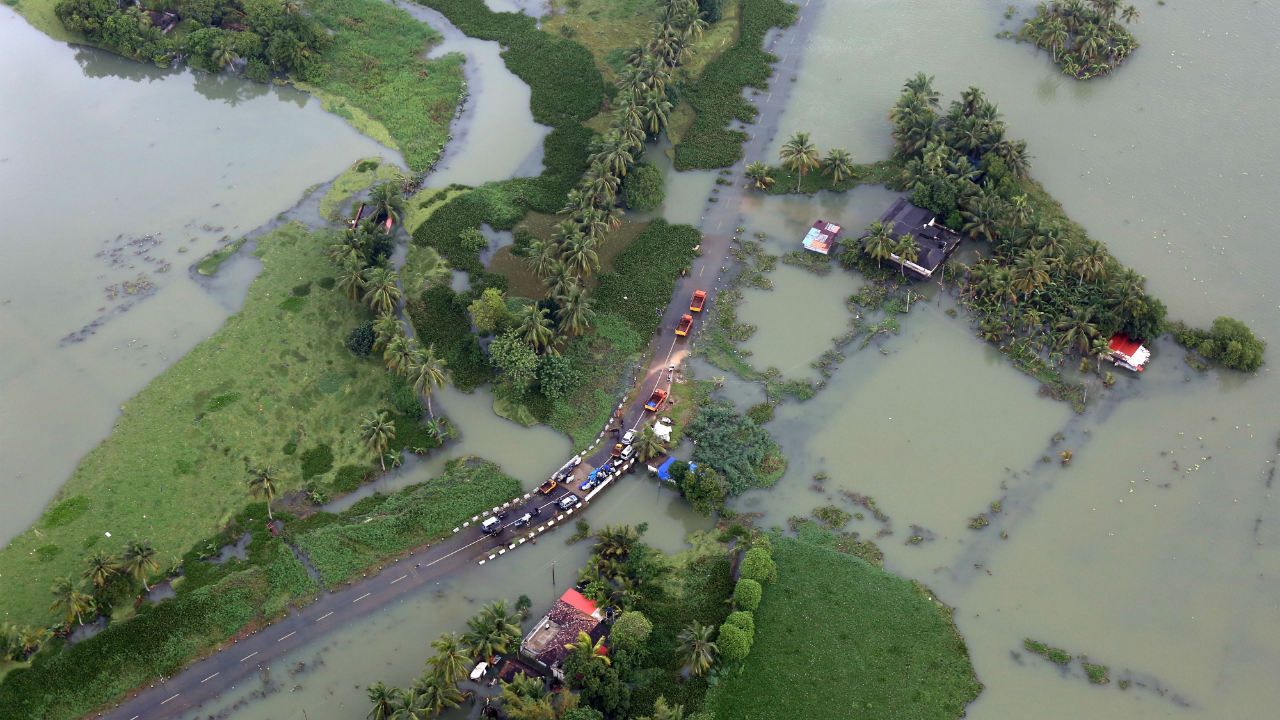 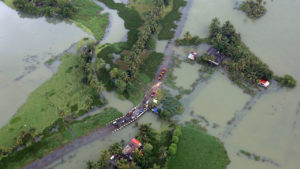 Two years ago, the United Nations Educational and Cultural Organization (UNESCO) World Radio Day theme was: ‘Radio and Emergency and Disaster Situations’. The message for the year 2016 was simple but clear: ‘Radio saves lives.’ Two years later, radio indeed saved lives in Kerala, a state in the southern part of India.

In 2018, Kerala witnessed the worst ever flooding in nearly a century – a direct consequence of unusually heavy rainfall during the monsoon season in July coupled with large discharges from the dams and landslides. Many people went missing. Over 483 people lost their lives in the torrential rains. At one point, all 14 districts of the state were placed on red alert. At least a million people were evacuated. According to the Government of Kerala, one-sixth of its total population were directly affected by the floods and flood-related incidents. Subsequently, the Central Government later declared the floods as a ‘calamity of severe nature’. Rescue and relief operations were on in full throttle. For the first time in history, 35 out of the state’s 54 dams were opened.  The worst part: All the five gates of the Idukki Dam were opened at the same time, a first in 26 years.

If there was a silver lining to this formidable natural disaster, it was the emergence of a couple of equally formidable heroes. The first were the fishermen who managed to rescue more than 65,000 people from various districts.

Wayanad, a district in the north-east of Kerala, was severely hit by the heavy rains. According to reliable sources, over 29,000 people had to be moved to relief camps in the district. About 1,440 houses were partially damaged and over 500 houses fully damaged. The opening of various dams and landslides made the situation worse especially for those dependent on agriculture and allied activities which constituted a huge part of the population. Radio Mattoli 90.4 fm, the only community radio in the district, opened its doors for rescue, relief and rehabilitation operations. The radio was able to utilise its expertise and all its facilities to support those affected by the flood. By providing flood-related information to the people, the radio became a mediator between the benefactor and the beneficiary. They broadcasted crucial   information like:  when certain dams would be opened, for how long and the areas that were likely to be affected. Helpline numbers were operationalized for the rescue of those stuck in different parts of the district. The district administration could also use the radio station to give immediate notices and warnings. Staff and other expert volunteers participated in flood relief programs by providing immediate support, information and other rehabilitation strategies. Radio Mattoli also collaborated with NGOs to provide food, clothing, shelter as well as medical services to those in need. Even when some of their staff couldn’t reach the station due to incessant rains, the radio continued with its broadcast, often engaging in live broadcasting. 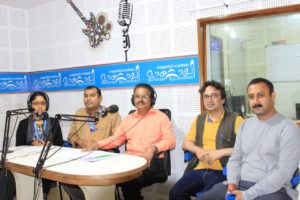 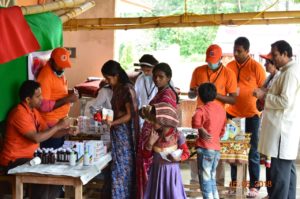 Radio Media Village 90.8 fm, the first community radio service in Kottayam district, started broadcasting information even as the rains started. Live broadcasting took over when the situation started to worsen. Help poured in when people who were stranded were connected on live programs.  The station director shared an insightful story. A family that had moved safely called the radio station during the floods and sought help for their cow stuck at home. They were desperate to know the cow’s condition. Their concern was broadcast live to listeners and was also put up on social media. The response was huge and finally the cow was saved. The staff realised that people still trusted and had confidence in community radios. In the absence of television, mobiles or electricity for that matter, the radio provided frequent updates to the people. Programmes scheduled for Onam were cancelled.  Radio Media Village also played a substantial part in collecting flood relief materials. They coordinated with different relief camps and supplied materials according to the needs of each camp.

Radio Neythal 107.8 fm in Alappuzha district did some interesting rescue operations. They mobilised boatmen for rescue and in one case the station-in-charge himself went to Chengannur, one of the worst flood hit areas, with 3 boats. The boatmen were later honoured by the radio. Yet another area in the district, Kuttanad, was submerged in water even before the floods. The radio station made sure that even this information was communicated to the listeners. Once the floods hit the district, they put the other programs on hold and broadcast ground information live. They focused on rescue operations even while discussing flood-related topics on the radio continuously. In all, 22 relief camps were set up in the district facilitated by their leadership. People would even bring in materials to their station. They also encouraged people to contribute to the Chief Minister’s Distress Relief Fund (CMDRF). Apart from the live broadcast, Radio Neythal’s mobile application showed live footage from the ground. The radio also carried out rehabilitation in collaboration with UNICEF, NGOs and the collectorate. Even when their technician was affected, broadcasting continued. 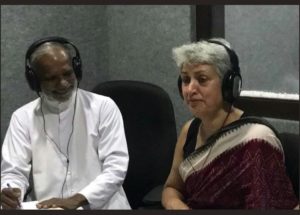 Ahalia Voice 90.4 fm in Palakkad dealt with a situation they had never faced earlier. The district, usually considered safe, was in trouble with the opening of the Malampuzha Dam. Flood-related information was frequently broadcast and these were given priority over the other scheduled programs. The radio worked in collaboration with the media, public relations department, the police, fire force, the district panchayat and the collector to carry out rescue, relief and rehabilitation operations. They utilised the social media to communicate information to the masses. For example, when they received the information that volunteers were required to transport relief materials which were brought in a helicopter to Nelliampathy, they immediately announced the same on the radio. They were able to mobilise volunteers within a short span of time. The station-in-charge confidently  narrated that they not only understood the power of community radio, but also succeeded in demonstrating its effectiveness.

Radio Mangalam 91.2 fm in Kottayam catered to the information needs in the districts of Pathanmthitta, Alappuzha, Kottayam, Idukki amd Ernakulam. Apart from airing emergency information live, they broadcasted flood-related information including rescue numbers to listeners. They even withdrew their advertisements during the period. They participated actively in relief camps by collecting food from different sources and distributing it across camps in the district. Even though one of their staff was affected by the flood, they did not go off air.

Janvani 90.8 fm in Kannur district of Kerala mostly dealt with broadcasting flood –related information to the people as the area was less affected by the floods. They passed on information from the public relations department. Requirements in relief camps were communicated through the radio. People were also encouraged to contribute to the CMDRF.

Radio DC 90.4 fm in Thiruvananthapuram, the capital of Kerala, actively participated in relief camps as well as in the cleaning efforts that followed. Apart from this, the radio broadcasted flood-related information including rescue numbers and interviews with health inspectors. They even removed entertainment programs and songs from their list. All of their staff were affected and the radio arranged accommodation for them.

Radio MACFAST 90.4 fm in Tiruvalla cancelled their entertainment programs and substituted them with flood-related programs. They worked in collaboration with government agencies. Even though their sound engineer was affected, they continued to be on air.

Radio Benziger 107.8 fm in Kollam district mostly dealt with broadcasting flood-related information, news, tips, updates and warnings to the people since the area was less affected by the flood. 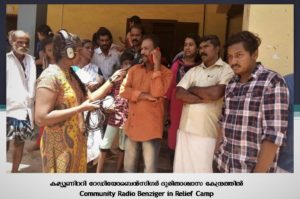 Global Radio 91.2 fm, the first community radio in Alappuzha, sent their staff to the affected areas, especially Kuttanad, and gave out flood-related information and updates continuously. The radio worked in collaboration with voluntary organisations and other groups to collect and distribute relief materials to different camps in the region. They also arranged counselling and entertainment programs in the camps. Their staff, including the executive director, program producer and reporters, were affected and had to move to camps. Yet, the station continued to be on air. 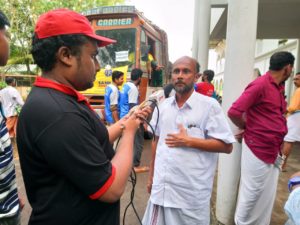 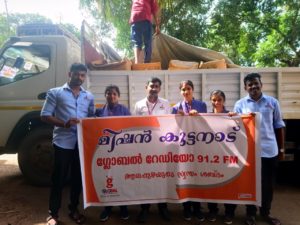 Stations discuss best practices at CR-CIT workshop in the UK

Chair participates in the Global Media Forum at Germany