Shruti Iyer, a summer intern with the UNESCO Chair on Community Media, documents the initiatives taken up by CR stations in India to reach out to their communities during the COVID-19 crisis.

The Coronavirus pandemic and the subsequent lockdown situation has taken the world by storm and has brought drastic changes in everyone’s lifestyles. One of the significant challenges we face is the severe impact the lockdown has had on communication. Various communities across the country have been isolated from each other, staying behind closed doors, with minimal interaction to the outside world and limited internet and network access.

Through the summer of 2020, various community radio stations in India have taken on the responsibility to fill this void, with the help of local government bodies, tehsildars, district magistrates, collectors, police officers, and hospitals, to name a few. Various stations have different stories to share on instilling a beacon of closed knit community living, in the face of a devastating pandemic.

Adjusting to a new means of communication, through community radio stations was rapidly accepted. “Initially we had very few calls, but over time we became a popular source for one to get information about their neighbours as they could no longer meet in groups,” said Mr. Nirmalya Mukherjee Of Nityananda Janawani, Purulia, West Bengal. 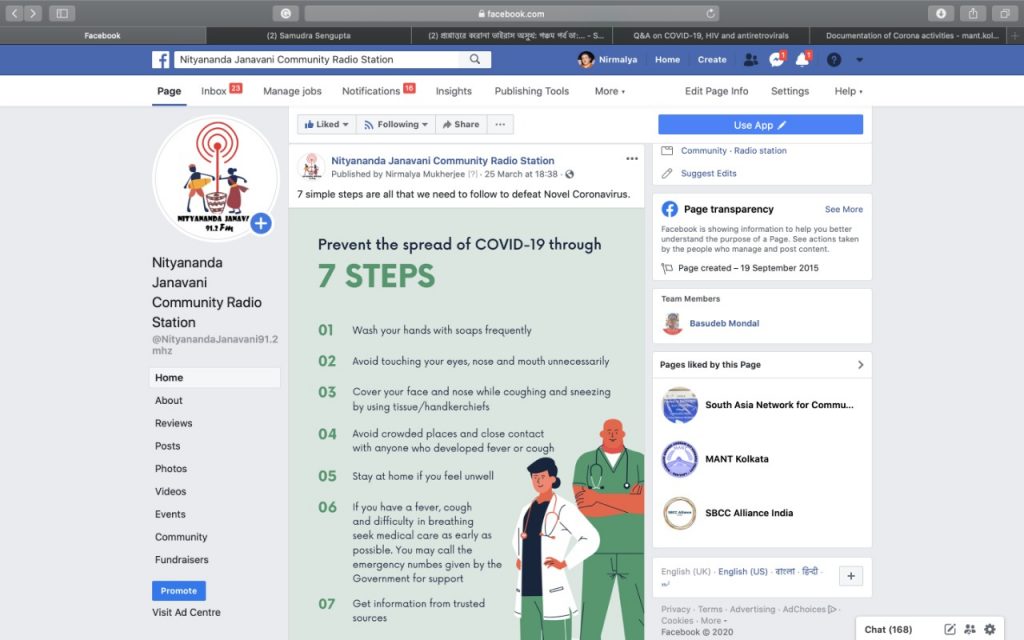 Having a medium to share their experiences, and stories of living in the novel circumstances of a country-wide lockdown, helped people feel connected, listened to, and most importantly, not alone under these circumstances. Various programmes including the aptly named ‘Lockdown-e-Kotha‘ (curated by Nityananda Janawani) and ‘Nazriya’, a programme produced by Waqt-Ki-Awaaz, Kanpur Dehat, concentrated on the locals and their stories. The segments in these programmes often entailed discussions over popular topics chosen by a listener. It was evident that people were taking to staying connected, as they were in pre-lockdown times, though in an unconventional way.

A thriving community is one that is aware and updated about matters that concern their lives directly. Thus, communication was not restricted to being between the locals of the communities. Community radio stations coordinated with various bodies of authority, to also enable communication between locals and relevant medical and administrative personnel. This helped locals to clear their queries first hand and get guidelines and instructions regarding social distancing and lockdown norms from credible sources.

“We have daily conversations with relevant personnel including police officers, health experts, local MLAs, sanitation inspectors, and local commissioners,” said Mr. Venkat Reddy, of Radio Guru, Telangana. Questions posed by locals included queries regarding health addressed by around fifteen doctors of different specialities, and inquiries regarding the amounts of rations available and where to find them, addressed by the local commissioner. A similar show, ‘Sarailevru Mikarvaru’ is being produced by Radio Ala, Kakinada, Andhra Pradesh.

In association with the local District Magistrate, Mandakini-Ki-Awaaz, Uttarakhand, produced the ‘Janta Milan Programme’ to address a wide range of issues arising from natural disasters, wild animals, and loss of jobs for daily wage earners.  Every Friday, the locals call with questions and problems they are facing, and the answers are broadcast on Mondays and Tuesdays.

Being the bridge between the locals and relevant authorities, community radio stations have not only enabled the addressal of queries, but also the resolution of various problems the locals face, in association with the appropriate bodies. Problems faced by the locals differ based on their occupation, geographic situation, and other factors, and thus identification of the proper authorities and coordinating with them, is crucial .“Farmers faced a lot of problems because they didn’t know if they could sell their produce and where,” said Mr. Prashanth of Radio Karsakavani. The radio station put the farmers in touch with the Agriculture and Horticulture office. A factory in Srinivasapuram was identified, and sales were made to the factory, thereby solving the issue at hand.

“We are the only radio station catering to the fishermen of Rameshwaram,” said Ms. Gayatri, of Kadal Osai station, Rameshwaram, Tamil Nadu. With the help of ‘Pamban News’ not only do they provide the local fishermen with general information, but also give updates specific to them related to the fish markets, rates, and restrictions. This helps the fishermen to make as many sales as possible, which goes a great way in assisting fishermen to earn on a day-to-day basis.

Radio Hirakhand, Odisha, set up a helpline service and connected 60-70 migrant labourers to the District Magistrate Office, as they were facing a food shortage crisis. Radio Rathinavani, pushed a cash collection drive to help daily wage earners in association with Mithra Technology Foundation.

Besides communication, community radio stations, along with various other groups, sought to educate and sensitise people about the pandemic.

One of the many initiatives taken up by community radio stations included highlighting the concerns of minorities within the community. Radio Janadhwani, Karnataka, conducts a ‘Teleconsultation and Telerehabilitation’ programme for the People with Disability (PwD) community. “The PwD faced different difficulties during this time, and required special attention” a representative, explaining the programme’s motive to help people better understand this community. The lockdown has had an incredibly deep impact on students and children with disabilities, as their education has had to deal with a lot of roadblocks. Many of them are brimming with questions, and the addressing of these questions are pivotal to make them feel included and positive. Radio Yeralavani, Maharashtra, was posed with a query from a class 12th biology student, regarding the impact of the Coronavirus. The radio station got the student in touch with a doctor to clear her questions, much to her satisfaction

“We have 90 RJs, each representing a different community in Bangalore,” said, Ms. Pinky Chandran of Radioactive, Karnataka, indicating the diversity the station represented, the station thus gave a voice to various minority communities across the city.

Education propagated by the community radio station includes explanation of the Coronavirus related jargon, as many locals misinterpret the words commonly used, which results in fear. “People didn’t know what quarantine meant. They thought patients were thrown away instead of getting treatment,” said Mr. Uday Godbole of Radio Yeralavani, Maharashtra. Hence the locals were informed about ‘quarantine’ and ‘social distancing’ especially in the programme dealing with fake news, along with short interviews with recovered patients to throw light on the process of recovery itself.

Sensitisation of the community also includes breaking away from certain social evils. The current pandemic has led to the issues around the reporting of symptoms that have led to unnecessary stigmatisation because of which essential cases go unnoticed. “We had radio dramas about various issues. One play revolved around a mother who did not let her son report the symptom he suffered – thereby infecting many locals,” said Mr. Shisir Kumar Das of Radio Surbhi, Odisha. The station produced many audio plays and skits to tackle derogatory practices, not only informing the locals of the dangers but also educating them on the right course of action.

The unexpected and challenging conditions have taken an unprecedented toll on mental health. “This show talks about living life during the lockdown and managing one’s mental health,” said Mr. Santosh RC of Radio Charminar, Telangana regarding a programme aptly named ‘Zindagi Kaise Jiye’.The show aims at initiating a conversation about a topic that is often considered as taboo and misunderstood. A crucial element of overall community health, open communication, along with community awareness and support, can go a long way to better the situation for those who suffer from mental health disorders. Various people do not have the means to connect to professional help or counselling; Udaan is a mental health programme that connects callers to counsellors done by Gurgaon-Ki-Awaaz, Haryana.

A part of community living is taking pride in one’s culture, and what better way to go through a lockdown than getting in touch with one’s roots. Local musicians’ content seemed to add to the morale of listeners of Kumaon Vani, Uttarakhand. ‘Madhuban Antlang’ a programme dedicated to local musicians and their stories is produced by Radio Antlang, Rajasthan. Adding an educational spin to their musical content, Radio Gunjan of Himachal Pradesh made songs regarding symptoms and concepts related to Coronavirus in local, folksong style.

In fact, listeners were quite keen on such content, as it instilled a sense of pride, heritage, and sustenance of the same. “Local fishermen pointed out that the Ambaa song is a dying art form, and they requested us to throw light on it,” said Ms. Gayathri of Kadal Osai, Tamil Nadu. Alfaz-E-Mewat of Haryana produced Mirasi with storytelling segments, a very popular programme for the station. Celebrations were conducted, in an unconventional manner; “We celebrated Ambedkar Jayanti,” said Mr. Mukesh of Radio Rathinavani, elaborating on how students and teachers of Rathnivani International Public School discussed Dr. B.R Ambedkar’s dream, and how each one of them was contributing towards it.

While social distancing norms have kept us predominantly behind locked doors, various CR stations have made live visits to their local communities. “We helped government institutions deliver food to 300-400 people and organized sessions on consumer awareness,” said Ms. Suneeti, of Rudi No Radio, speaking of the work the station had done in roughly nine zilas. Demonstrations of washing hands were conducted by Radio Muskan, Odisha, in association with collectors and other representatives, in local bus stands, auto stands, and other public areas to improve local awareness. Along with representatives from Prathamic Arogya, Radio Mann Deshi, Maharashtra conducted rounds in the bigger cities of their Tehsil, demonstrating the washing of hands and wearing of masks along with specific announcements made by the accompanying medical personnel.

Community radio stations along with various bodies and enthusiastic locals have worked dedicatedly towards the upkeep of spirits of their communities and the country at large, through radio and sometimes also non-radio means. The spirit across the country was that together, the communities could effectively face the pandemic equipped with the right tools and resolve.

Helping Communities Cope with the Pandemic: The Community Radio Way