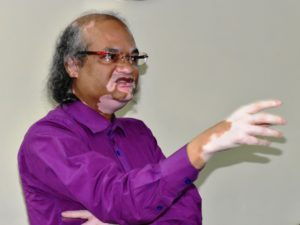 AHM Bazlur Rahman is an iconic figure in the community radio movement in South Asia. As the CEO of Bangladesh NGOs Network for Radio and Communication (BNNRC), Rahman energized the government and civil society in his country to establish a dynamic community radio sector, within a distinct policy framework. He is well-travelled, imbibing experiences and models from around the world and advocating for change in the media landscape not only in Bangladesh, but also in the rest of South Asia. Vinod Pavarala and Kanchan K. Malik met him at the BNNRC office in Dhaka and discussed the growth of community radio in Bangladesh and in other parts of the region. Excerpts from the interview:

VP: Could you please tell us about the status of community radio in Bangladesh today?
BR: In Bangladesh, there are 17 community radio stations on air and another 15 stations are awaiting spectrum allocation. We hope by the end of December all 15 will join. Now, 17 community radio stations produce 125 hours of programmes per day, most of which come from the local community, and by the local community. About 1000 youth men and women (52%) are working with these stations as community radio broadcasters. The programming line is development – there are basic four areas: to inform, to educate, development motivation, and local entertainment. All programmes basically originate at the local level with consultation and participation from the local communities. It is our estimate that these 125 hours a day are being produced with the participation of minimum 4000 people.

Side by side local government officials are seen as partners of the community radio station. This is one of the strengths of community radio in Bangladesh. At the central government level, our Ministry of Information has already revised the Community Radio Policy 2008 after examining our practices and experiences. This revised policy is now awaiting final declaration.

VP: What will be some of the key features of this new policy?
BR: One key feature will be permitting of commercial advertisements – up to 10% of air time – that are in line with National Broadcasting Policy Advertisement Guidelines. Now, community radios broadcast only some development advertisements. I think will be a great area, because through this our radio will more sustainable. Our volunteers and staff can get better honorarium and wages through this.

The Ministry has already issued a D.O. letter (demi-official letter) to all ministries so that they can provide their development advertisements through community radio. This way the government can utilize the potential of community radio for promoting development issues, such as health, family planning, environment, and other safety net issues. In the future, I think, the information related gap will minimize between the rural community and the government, especially with safety net issues.

KKM: Is there any provision in the new policy on permitting news broadcasting in community radio?
BR: We have provision for what we call development news. We have some embargo regarding political news, political party news. Otherwise, our community radios do a lot of news on community problems, community unrest, community solutions, which can all be seen as political. Only, we cannot broadcast party-based news. The revised policy will maintain the same. We are okay with this because, as a growing sector in Bangladesh, community radio needs more time to build its capacity to handle political news.

VP: Now, most of the first round of stations, the initial 14, have experience of about five years of being on air. What has been the learning from the ground level that BNNRC and you could gather?
BR: I would like to share with you some findings. CR stations have started addressing issues of disadvantaged communities like Dalits in our programmes. Secondly, community radios in Bangladesh have been playing a good role in the area of disaster risk reduction. When disasters struck power lines in coastal areas and television was off, it was basically radio that saved the coastal people. Local administrators went to stations that were struggling to operate through diesel powered generators and told them, “please do not interrupt your broadcast, we will provide you diesel.” This is the trust and credibility that are enjoyed by community radio today.

Another learning I would like to share with you is dialogue, a process established at the community level through radio. Dialogue between local government and civil society, with other issue-based organisations or campaign groups. Community radio has been promoting dialogue among different stakeholders in development. Take a typical magazine format programme that runs for 30 minutes to one hour, the community radio station always invites, engages the relevant local stakeholders. One person comes from the government, another from civil society, and another a beneficiary group. Through a dialogue between the three of them, they move towards a solution. 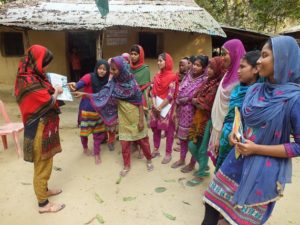 Voices of rural people on CR through training of youth women

KKM: One of your big achievements has been the training of the youth women and you won a WSIS award also for it. Please tell us about this initiative.
BR: Basically, this initiative is in line with community radio journalism. While our youth seem to be interested to work with community radio, our rural press has no women. There is a big vacuum in raising rural women’s voices in the media. To address that we started a programme called, ‘Youth Women in Community Radio’. We set up a 6-month fellowship programme and selected youth women by announcing on radio and distributing leaflets in the local community. Our objective was that with this training and working with mentors, the rural woman community radio journalist would also develop some news for the local press. Now, 59 such youth women, including 40 from Dalit communities, are with community radio stations. After this process, our staff members, community radio station managers, and also community radio well-wishers realised the dynamism of the daily lives of Dalits and that they are a neglected section of our society.

VP: Now, caste discrimination is quite a big issue, not only in Bangladesh but also in some other parts of South Asia. Do you think that community radio must play a role in addressing discrimination and inequality in other parts of South Asia as well?
BR: Nepal community radio is already doing something on this issue, I think. You perhaps know about Jagran Media group’s efforts in Nepal. It is now time to act throughout the South Asian region, sharing experiences regarding disadvantaged communities, especially Dalits. I think we need some empirical research on how radio is already addressing the issue and how radio can address it in the future, followed by a dialogue.

We got in the habit of travelling around and teaching people to build radio stations: Pete Tridish