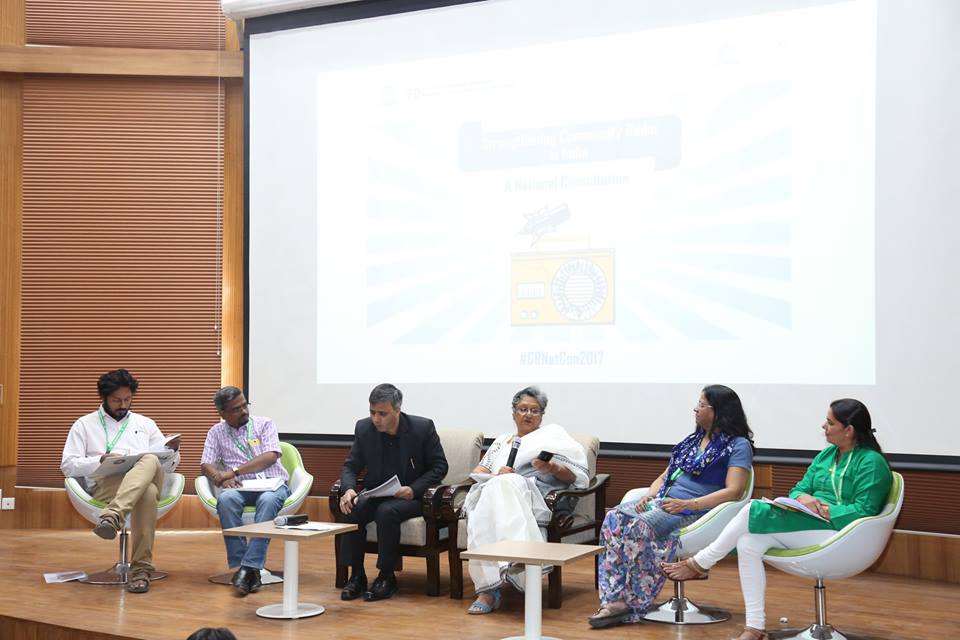 The paper presentation at the second session of National Consultation called on the CR’s capacity to be able to negotiate spaces where communities can create and share such content which is of context to their life and which is in their own language, without depending on the mainstream media. The paper, ‘Capacity Building for CR: Whose capacities? What Capacities?’ was presented by Rukmini Vemraju who herself is a CR expert. Anushi Agrawal, Jayalakshmi Chittoor, Pooja Murada and Brijendra Panwar also contributed to the paper by identifying various communities that need constant training or capacity building in the ever changing and fragmented CR sector.

Capacity building should not just be limited to being an operation but should strengthen abilities of community members in developing new, bold program formats and trainers can help in achieving this by encouraging the CRS to reinvent their programming method. Training in content production and radio practices will assist the CR members in experimenting with content design that goes beyond language and dialect innovation. Capacity building for producers will expand their creativity in production work, resulting in more open, participative and gender sensitive programmes that have equal representation of both male and female population. There is a gap in the skills required of community reporters. Training by users of the latest technology and software will help in refining the technical skills of CR reporters around mixing, sound recording and sound designing, and eventually motivating them to experiment with new technologies when working on a program.

Over the past decade, there have been major capacity building initiatives towards content production and CRS operations but there is negligible attention on developing the community’s capabilities to engage in policy debates which is obligatory to preserve the sector’s democracy. CR needs to advance its documentation treatise in order to excellently conserve the folk art and music forms of urban and semi urban spaces. Revision of training formats and training locations has also been suggested in the paper. Inclusion of more on-site training by CRS focusing on research and production along with facilitation of discussions on training inputs have been proposed by the scholars of the paper. The authors have also recommended on promoting a multi-sectoral approach to training which has the participation of experts from media houses as well from the artists on issues of gender, health and folk arts. Capacity building programmes should be organised regularly by CRS of different regions without relying on the government bodies or other stakeholders of CR sector.

Read the entire working paper on Capacity Building for CR.

Highlights of panel discussion on ‘Issues in Capacity Building’:

From opportunity to aspiration… to frustration

Doing it better – a self-assessment guide