The community radio stations in Bangladesh have once again risen to the occasion and are struggling against great odds to contribute their bit to the national effort to fight the Coronavirus pandemic, collectively broadcasting over 50 hours of relevant content every day.

Prof. Vinod Pavarala, the UNESCO Chair on Community Media, who was invited to a video meeting with team members of the Bangladesh NGOs Network for Radio & Communication (BNNRC) on Tuesday, April 28, 2020, was briefed by the CEO AHM Bazlur Rahman and his colleagues about the ongoing efforts and the challenges being faced by the community radio sector in the country. From March 1, the 19 community radio stations in Bangladesh, including two that broadcast only via social media such as Facebook and YouTube, have been focusing relentlessly on: providing informative content to raise awareness about the public health crisis; promoting collective action against the spread of the virus through cooperation with and mobilization of government at various levels, civil society, and the market; and addressing issues related to the daily lives and livelihoods of communities. They have been broadcasting online talk shows, interviews, creative magazine shows, and PSAs featuring scientific and health information accessed from organizations such as the WHO, UNICEF, and the Bangladesh-based Institute of Epidemiology, Disease Control and Research, and regulations and instructions issued by the government from time to time. 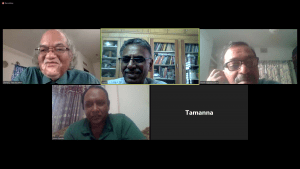 Prof. Vinod Pavarala in discussion with other members of BNNRC.

According to BNNRC, this work over the last couple of months has not been easy. Among the approximately 1000 community broadcasters in the country, only about 200 are currently able to function, what with social distancing norms, lockdowns, and transport problems. The severe personnel crisis facing the stations is further compounded by restrictions on the movement of CR reporters, poor mobile signals, slow and expensive Internet connectivity through mobile data packages, and, interestingly, the reluctance of government officials to give interviews to CR staff over the phone. As BNNRC found out in a two-hour long video conference they held the other day with all the CR stations, despite these problems every station has managed to have at least one or two people reporting at the station to ensure continuity of transmission.

Of course, a major issue that the community radio sector is facing in Bangladesh is its precarious financial condition. With the stations mostly fending for themselves over the past two months, some donor agencies are slowly stepping in, although funds from these sources are yet to come through overcoming national and international bureaucratic hurdles. In a petition submitted to the Government of Bangladesh, BNNRC made some suggestions for immediate relief to the stations including buying airtime by upazila (sub-district) and district administrations and creating an emergency Covid-19 Content Bank Fund. Of course, in the long-term, BNNRC wishes that the government makes the Community Radio Trust Fund, mentioned in the 2018 CR Policy, a reality at the earliest. In addition, Bazlur Rahman mentioned that BNNRC is preparing a memorandum to be submitted to the Telecom Ministry requesting the use of at least a small percentage of the Universal Service Obligation Fund (estimated at about BDT 1600 crore) to bail out CR stations struggling to sustain themselves financially.

Even as the BNNRC is getting ready to observe World Press Freedom Day on May 3 with the theme, “CR in the era of Covid-19”, it has its hands full not only coordinating with and guiding the CR stations during this unprecedented situation, but also with its relatively recent remit of broader media development in Bangladesh. The latter involves a fairly robust strategy to build a strong independent media in the country by providing relevant training to journalists working in mainstream print and broadcast outlets in such things as conflict-sensitive reporting, fact verification, science and health journalism, and digital literacy.

Review of The Great Debate between Prof. Vinod Pavarala and Tony Durcan of the Newcastle City Council

Chair participates in the Global Media Forum at Germany