Conflict Resolution has emerged as an increasingly significant issue for community broadcasters in different parts of Asia-Pacific. How are conflict issues reported at the local level? How can fake news be contained? Can community radio stations make a difference? These were some of the issues that were actively discussed and critiqued during two workshops organised by the AMARC Asia-Pacific (AP) Regional Office in Nepal in September 2022.

The first workshop, on September 12th, supported by Brot fur die Welt, was a one-day training programme for station managers across 30 community radio stations in Nepal. It focused on the need for stations to regularise conflict resolution and peace-building in their radio programs. 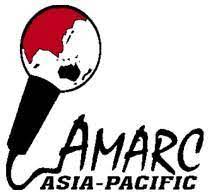 Setting the tone for the workshop at the very start, the Chief Trainer, Mr. Raghu Mainali, clarified that conflict is not just the absence of war. Pointing out the need to look beyond only armed conflict or political conflict, Mr. Mainali urged the participants to consider conflict as arising out of incompatible differences of opinions and incompatible views, or iniquities such as caste discrimination, gender discrimination, and unequal resource distribution.

According to Mr. Mainali, all societal issues that are in need of transformation should be considered as areas of conflict. Local government and non-governmental organisations had also allocated funds towards their resolution. It was therefore imperative for radio stations to include programmes on conflict resolution and conflict prevention in their program grid.

The participants were then divided into five groups to discuss whether there was a need to produce radio programmes on conflict, the frequency of such programmes, what kind of formats could be adopted, the topics that could be covered, possible networking and funding partners, the challenges that might surface and the opportunities that could emerge.

At the end of the workshop, Mr. Mainali underscored the for networking between community radio stations, experts and government officials alike. He shared his optimism that the participants would put to practice what they learned during the workshop.

Soon after the station manager’s workshop, AMARC Asia-Pacific Regional Office organised a three-day advanced training between 13th and 15th September, for 20 community radio journalists in Nepal on “Scaling up the Role of Community Radios in Conflict Resolution and Peace-Building.”

In his welcome address, Vice-President for South Asia, AMARC-AP, Mr. Subhas Khatiwada, asserted that the workshop was an opportunity for the radio journalists to share their knowledge and experiences with one another. He stressed that community radios should produce programmes that bring about social transformation and work towards resolving the conflicts in their community. He was hopeful that the training would enhance their programme production skills and contribute to their capacity development, enabling them to produce better programmes.

The first day’s sessions were primarily devoted towards understanding the causes of conflict, different sources of conflict, schools of thought and theories of conflict, approaches to dealing with conflict, and strategic options for conflict managers and decision-makers. The sessions were steered by the Head Trainer, Mr. Raghu Mainali and the Chief Resource Person, Dr. Bishnu Raj Upreti.

Day 2 focused on experiential learning. The participants were given practical assignments and travelled to nearby places, understanding the importance of field visits and research. Subsequently, they concentrated on developing their scripts. These were finalised and critiqued on the final day after which the participants were engaged in editing and mixing their programmes. Feedback was duly provided by the trainer and the workshop came to an end with the presentation of certificates to all participants.

Prof. Vinod Pavarala to participate as keynote speaker at The Radio Conference 2013

5th Edition of ‘The Radio Festival’ focuses on SDGs